This cruise will support the overall objective of Sirena Research and contribute to assess the occurrence of Cuvier’s Beaked Whale [Ziphius cavirostris (Cuvier, 1823)] (henceforth Zc) in uninvestigated areas of the Pelagos Sanctuary and adjacent zones. The research will be carried out by using the Catamaran Research Vessel Krill (Figure 1). The study area will be surveyed in order to record both sightings and acoustic signatures. Scientists from Tuscan universities and other scientific associations will participate in this expedition.

The study area of the project shows batimetric characteristics similar to those of the Ligurian Sea, where several investigations aimed to observe Zc were conducted in recent years. This research will help to determine if Zc can be detected using tuned (towed and stationary) devices to collect baseline behavioral information and test Zc habitat models.

The main objectives of the cruise are the following:
1. To assess the occurrence and abundance of Zc in the study area. Despite Zc strandings were recorded in both the east and west coasts of that latitudes, that area has never been object of research aimed to observe Zc.
2. To develop, deploy and test specific hydrophone systems to detect and record Zc vocalizations.

The study area is located in the southern zone of the Tuscan Archipelago and the southernmost portion of the Pelagos Sanctuary (Table 1 and Figure 2). 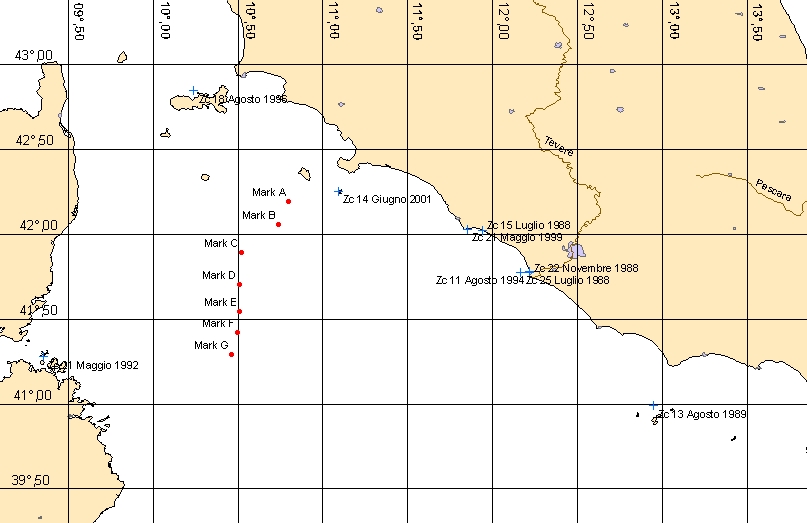 Figure 2. Map of study area. Marks are in red, whereas recorded strandings are in blue.

The task of the DII regards the analysis of sounds emitted by Zc. Zc emits sounds only at depths greater than 400-500 meters; the sounds are short ultrasonic pulses centered at about 40 kHz (range 20-60 kHz) and emitted with at intervals of about 400ms. As they are high in frequency and emitted at great depth, they reach the sea surface with very little energy and are impossible to detect with standard gear working up to 20 kHz only. The Zc use pulse trains as biosonar. The number of clicks and the temporal interval between successive clicks depend on several factors, such as the distance from the target, the environmental conditions and the expectation of the animal on the presence/absence of the prey. When the Zc is swimming, the time between clicks often changes. A train of clicks can contain from a few to hundreds of clicks. The aim of our study is to remotely record the acoustic signals of Zc by developing suitable equipment in order to characterize their sonar clicks both in time and frequency domain, and by developing a special sotware to detect Zc clicks in real time and play mode.

Visual survey will be carried out according to the methods described in the section 3.2.1. Samples of tissue will be obtained by using a biopsy gun (Figure 3). Individual biopsy tissues will be used to extract genomic DNA in order to set up a battery of genetic markers. These could be employed for further analyses on species’ genetic structure, population boundaries and/or identification of familiar groups in the Mediterranean. For instance, genotypes (and/or haplotypes) of individuals from the area provided for this project could be compared with those recorded in the Ligurian Sea.

CETUS will contribute to this project with its research boat Krill and with its experienced staff of marine mammals biologists. Visual survey will be carried out according to the methods described in the section 3.2.1.

Visual survey will be carried out according to the methods described in the section 3.2.1. In particular, GA will gather classical data on marine mammal behavior (time of diving, number and frequency of breathing acts, etc.)

acoustic recordings will be carried out by AGUAtech through the use of digital hydrophones with the range between 10 Hz, 40 kHz, coupled probe CTD

Passive Acoustic Procedure
When the vessel Krill will approach individuals of Zc, the broadband hydrophone will be employed to record sounds. The boat will be maneuvered to position the hydrophone in an area as close as possible to the diving point. All data will be recorded on computer and processed at NURC and made appropriately available to other researchers.

Visual Watch will collect several kinds of data significant for each sighting event.
Among these, the most important are:
- An accurate horizontal distance (radial distance) from the ship
- The relative bearing (horizontal angle off the bow of the vessel) to the position of the animal
- Species recognition
- Group size
- Behavior
- Photos
The visual team will operate in focal follow mode in case of sightings of Zc and in survey mode during regular operations, on station, and during transit between stations.

Visual observers will record distance and relative bearing to the position of the animal, possibly at each blow or upon broaching. This information, acquired by the focal follow mask of the visual logging system, will give a surface track of the cetaceans plotted in real time together with the vessel track. Sighting positions and rules: one observer uses binoculars; a second naked eyes/regular binocular observer will help to track the focal animal and act as the recorder. If during focal follow operations “non target” species are sighted, these events will be quickly recorded in the survey data mask of the visual logging system. Environmental conditions and visual effort will be recorded on the hour and at each half hour in the proper masks of the visual logging system. Since sighting operations during focal follow are extremely variable, possible changes of methodology may occur at any time.

Vessel speed will be less than or equal to 5 kts. Two observers will operate on the lateral sides of the vessel and one on the bow. Observers’ field of view from the boat during transects will be from -90° and +90° off the vessel, with a total coverage of 180° each observer.

The vessel will be drifting or maintaining station. Two observers will operate on the lateral sides of the vessel and one on the bow. Observers’ field of view from the boat during transects will be from -90° and +90° off the vessel, with a total coverage of 180° each observer.